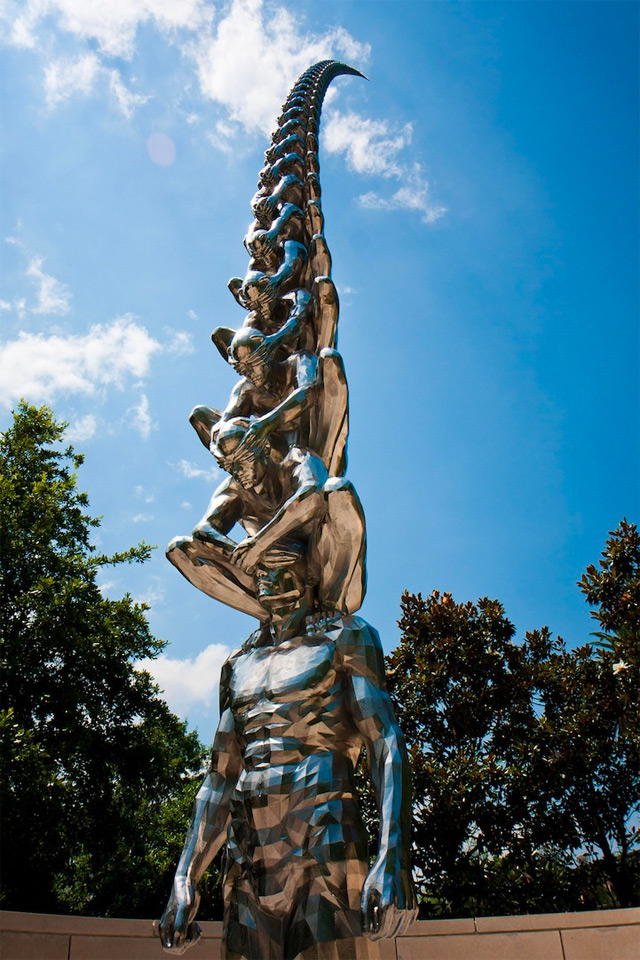 “What is non-self, Anatta? It means impermanence. If things are impermanent, they don’t remain the same things forever. We should learn how to look at life as streams of being, and not as separate entities.You of this moment are no longer you of a minute ago. There is no permanent entity within us, there is only a stream of being.”

In Buddhism, that thread of energy which moves from life to life is called the “mindstream”, and represents the continuum of consciousness that arises moment to moment, dependent on causes and conditions, and thus persists in a state of perpetual flux.

Most are by now familiar with the concept of “stream of consciousness”, popularized by the philosopher William James in the 19th century, but the Buddhist concept of mindstream precedes it by several thousand years. The concept itself has undergone various permutations, as different traditions within Buddhism have each interpreted it based on their own level of understanding.

Certainly, the nature of consciousness itself can be investigated to see if it is real, but the consideration on its dream-like quality has been explored in previous essays, while this particular post will concern itself more with the mechanics of the mental continuum as it is commonly understood.

The traditional Buddhist teaching is that the mindstream is not a permanent entity, but rather a series of impermanent moments. However, by habit we tend to think of these moments as successive moments in a stream of time which have some kind of substantial reality to them, a kind of permanence. We tell ourselves stories about these moments and we project these stories into the future. This is how we construct an identity of an enduring personal self, an entity with a past and future. Nevertheless, from the Buddhist perspective, these stories are simply karmic productions, and do not even amount to a permanent self-entity. They contribute to the creation of expectations regarding the “way things are” and “the way things will be” and then when these expectations are met or not met the experience of happiness or sorrow follows. Altogether, it may constitute an illusion-like phenomenal dream, but for we who are still asleep the suffering is undeniably real.

The mindstream carries certain concretized fixations with it, called “karmic imprints” (Sanskrit “Vasanas”) from birth to birth, and these imprints are either compounded further by life and relations or dissolved, depending on how one takes responsibility for them. For example, the selfishness born of grasping and avoiding causes us to engage in negative actions, which in turn place negative imprints on the mindstream. On the other hand, seeing through and discarding selfish motives has the opposite effect, and is comparable to dropping off extra baggage, rather than accumulating it. As the baggage of the self-contraction is released, we become “lighter”, and the mindstream is freed up of those karmic imprints that have trapped it in a vicious cycle of craving and fear.

As the afflictive states spawned by negative karmic imprints are recognized, seen through, and released, liberation becomes a possibility. However, since we are by nature immortal Spirit, always already free, what kind of liberation are we talking about? Well, we are talking about liberation from the binding effects generated by our previous negative actions while in material form.

According to the traditional Buddhist rationale, the force of those actions keeps drawing us back to incarnation on this relatively low-level war planet (Samsara) so that we might resolve the traumas and complications our less than skillful behaviors have created in prior human adventures. As the late Sage Ramana Maharshi noted, “Only after the vasanas have been destroyed can one attain liberation.”

Furthermore, one additional stumbling block to “clearing” the mindstream that is not as much acknowledged in this regard is the tendency we have to cling, not only to negative fixed imprints, but also to positive karmic “fruits”. However, any imprint, regardless of how appealing, is ultimately extra baggage and must be surrendered, if one is to realize their prior freedom and move on beyond the human limitation and its associated web in which one may have entangled themselves through these various imprints.

There is an aspect of the mindstream that is its fundamental basis, or ground. It functions like a storehouse in which the habitual tendencies and karmic imprints of past actions caused by our emotional reactivity and errors in judgment and appreciation are all stored like seeds. It contains all the traces or impressions of the past actions and all good and bad future potentialities. When the right conditions arise, they germinate and manifest as circumstances and situations in our lives. In Buddhism it is called the 8th Consciousness, or “Alaya-Vijnana”.

If we have a habit of thinking and reacting in a particular pattern, positive or negative, then these tendencies will be triggered and easily provoked. They will recur and continue recurring. Within the loop of constant repetition, our inclinations and habits thus become steadily more entrenched, increasing and gathering power, even when we sleep and dream. This is how they come to determine our life and death, and how they contribute to our rebirth in realms such as this one in which we currently find ourselves.

As mentioned earlier, the karmic imprints or energetic impulses, when activated, create the illusion of a solid and enduring self, which exists just on edge of the storehouse consciousness where the karmic imprints reside. They bind us to the sense and belief that we are a substantial and independent human person, separate from Source, rather than the limitless, indivisible Spirit that is our true identity.

Indeed, this is why our traumatic hurts and such feel so real and personal, and why they end up ruling our lives if we are mindless and unaware of their power to negatively influence our choices, relationships, work, and ability to cultivate mental and emotional well-being. Karmic imprints and their attendant conditioning have the potential to determine the nature of the world we inhabit. That is, whatever we experience externally is a projection of what is internal, although few of us ever bother to investigate the implications of that projection mechanism.

As the noted Tibetan master Dilgo Khyentse Rinpoche wrote: “Our belief that the mind is a real entity is a conclusion based on insufficient investigation. We believe a river we see today to be the same river we saw yesterday, but in reality a river never stays the same even for a second — the water that made up yesterday’s river will surely be part of the ocean by now. The same is true for the countless thoughts that run through our “mind” from morning to evening. Our mindstream is just a succession of instantaneous thoughts; there is no separate entity that you can point out as being a mind.”

By dis-identifying with the body-mind-self (through the practice of non-dwelling, for example), and turning attention back to its source, we can begin to systematically observe the arising of the impulse to follow our habitual karmic tendencies, and so choose to no longer be an unconscious victim, at the mercy of uninspected forces. Such conscious recognition of the actual nature of our own thoughts and emotions allows one the internal freedom to choose a skillful response to life tests anytime we are present and mindfully aware.

Such a conscious investigation can also break the spell of the separate self-sense we habitually believe ourselves to be. As Shechen Rabjam Rinpoche notes: “Despite the fact that we are a ceaselessly transforming stream, interdependent with other beings and the whole world, we imagine that there exists in us an unchanging entity that characterizes us and that we must protect and please. A thorough analysis of this reveals that it is only a fictitious mental construct.”

It is futile to dwell on the past. The best we can do is live with integrity here and now, eliminating all traces of the poisons such as greed, envy, hatred, and ignorance/arrogance whenever and wherever they appear. Remember, the discipline of silence is potent. It allows us the freed-up attention to assume the witness position, recognizing the arising of the ego-mind before it has a chance to sink in its tentacles and seduce us with the belief in the reality of the person we have mistaken ourselves to be — that mental fabrication composed of various conditioning factors and programs deeply embedded as karmic imprints.

In other words, we need to learn to refrain from submitting to the “Architect” – the ego-mind itself. Instead, we can dismantle its architecture brick by brick by observing it in action, recognizing its effort to confirm its existence, and subsequently no longer granting it reality by playing along in its game. As mentioned in previous essays, engaging the practice of non-dwelling is an effective expedient means in this regard.

Since we are not living in the past, we cannot become mindfully aware in the past and go back to change errors. We can only become aware in the moment when the tendencies are arising, and it is only in this moment when we actually have the power to choose to indulge negative habit energies, or refrain from doing so. By our choice in the moment then, we determine our future. What we are now is the result of our past choices, and if we want to see how we will be in the future, we need only observe the choices we are making in the moment now.

Beyond even the expedient (though still dualistic) assumption of the witness position, we can eventually recognize that what never changes or moves is the awake aware (knowing) space in which the stream of being appears, transforms, and disappears. Indeed, the mindstream is not our identity, but our display — a creative projection of consciousness into the virtual reality playground of space-time. Radiant emptiness momentarily reflects itself as the “me-experience”, in the same way our subconscious manifests dream characters that are also called streams of being.

In the midst of all this, it is especially important to remember that the greatest solvents for karmic imprints are humility, forgiveness, gratitude, and love. The cultivation of selfless compassion (Bodhicitta) serves to transform the mindstream and benefit all, and it is just such an attitude which is the foundation of the Buddhist Bodhisattva ideal, in which one sets aside their own personal welfare for the welfare of others.

Thus, it can be said that a transformed mindstream self-liberates through the power of love, and ultimately, it couldn’t happen in any other way. Released of its accumulated burden, the unfettered mind falls into its Source, also called the Heart, and shines there, at home, at peace.

“At first your karma is like a river falling through a gorge;
In mid-course it flows like a gently meandering River Ganga;
And finally, as a river becomes one with the ocean,
It ends in consummation like the meeting of mother and son.” 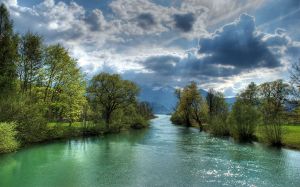